Today I ran my third half marathon of 2012 – the Royal Parks Half Marathon here in London. It was 13.1 miles through some of the most beautiful (royal) parks and iconic places this city has to offer. The weather was cold, crisp and sunny, and around 12500 people had showed up to run the race.

Having had several nightmares about this race, I tried to prepare myself as much as I could the night before. 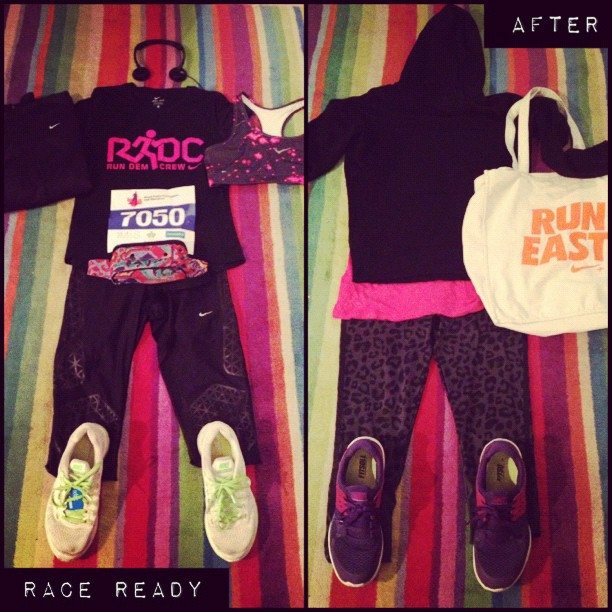 After a very bad nights sleep and the initial stress of waking up 30 minutes later than planned, I marched off with my partner in crime, Ditch, to catch the train in to London. 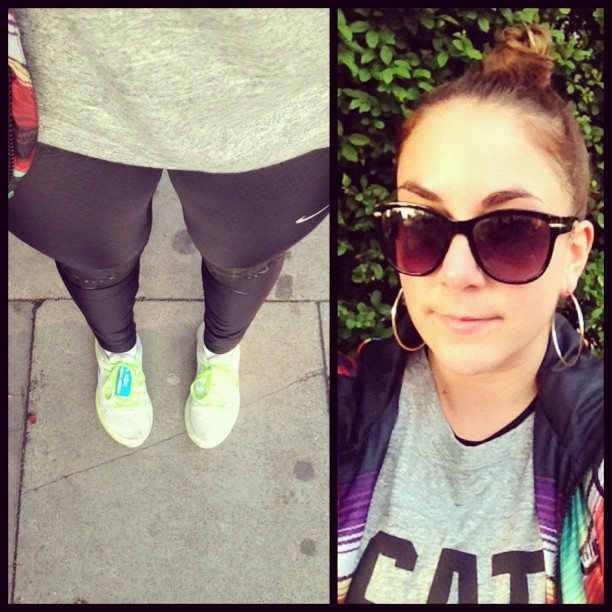 We got to Hyde Park for about 09:00 and the race was about to start 09:30. I knew that I wasn’t going to race because I’m saving my legs for the Amsterdam Half Marathon in two weeks time. But having said that, I still had the aim of getting a faster time than I did in Copenhagen in September (2:25) and not stopping at all during the race.

But the nerves (and coffee) were getting to me so I decided to try to have a quick wee before the start of the race (I say quick – I did stand in line for about 20 minutes!) 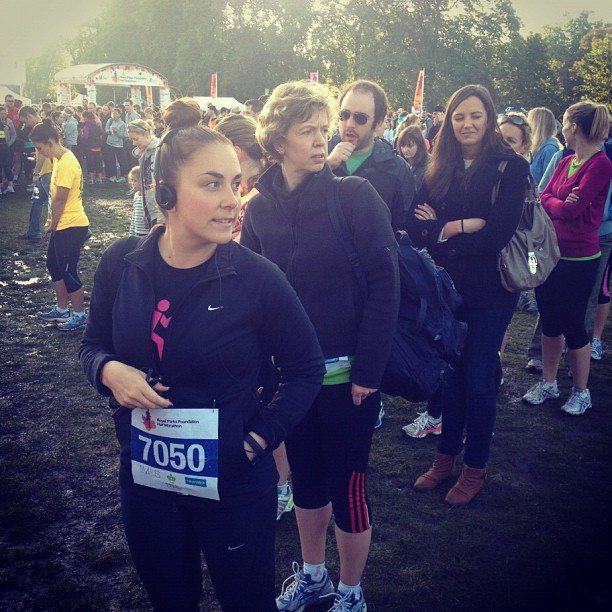 I tried finding some of my running friends before the start, but there were too many people to be able to find anybody. So I decided to just take a deep breath and run the race on my own. I knew some people from Run Dem Crew were going to be standing along the route cheering us on (CHEER DEM CREW! You guys helped me so much – words cannot describe!) and with that in mind, I took a deep breath and set off! 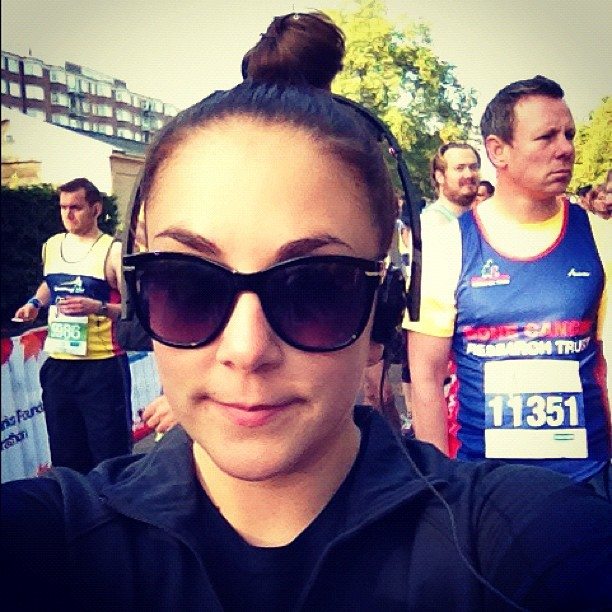 I have to say that the first 6 miles were probably my favourite. Not because they were the easiest but because I found them to be the most interesting ones as we went past some iconic places here in London. I kept a very steady pace according to my Nike+ running app, and I generally felt pretty damn happy, confident and good about my running.

I have to say, the last half of the race I was pretty bored because it felt like we were running circles around the same places in Hyde Park. I know I know, it was a PARK run, so it makes sense to do a lot of the running in the park, I just wish there would have been more stuff happening inside the park to keep my mind off the pain.

Not only did my hips, knees & calves feel tight as hell, I was forced to stop around mile 7-8 to attend a massive and painful blister that had developed on my left foot due to some weird stuff going on with my sock. I got worried that it might ruin my chances in Amsterdam, so I decided to stop, adjusted the sock, tighten my shoe, and carried on.

I was a bit bummed out about having to do that, but then I bumped into Jackie from my crew when we had around 3 miles left which lifted my spirit, and just before the finish line I spotted another crew member, Lynda Phoenix, who was running strong & smiley.

THE REAL VICTORY AND LESSON LEARNT FROM TODAY’S HALF MARATHON:

It’s no secret that I have been down in the dumps for a good 3-4 months now, and if I felt crap before running the Copenhagen Half a month ago, well then I can only compare to the last 4 weeks leading up to this half marathon as to some sort of sick mind torture that has tested many aspects of the way I am as a human being and the way I live my life.

On the 28th of October 2011 my life was changed forever when Bangs emailed me for the very first time about a project called Team Bangs On The Run. As a result of that I got to know some fierce young creative ladies, joined the most badass, loving and caring crew in the world, quite smoking, ran a half marathon for the first time in my life, plus many wonderful things that have come my way thanks to that life changing email and you guys have pretty much followed my journey since.

As a new runner, I have had to make concious decisions in order to be able to train & run the way I have done. It meant moving away from a lifestyle that consisted of 20 fags a day and basically just sitting on my ass, to basically take better care of myself. It wasn’t an easy process but I did it with determination and help/support from others.

However, if you have been following my journey, you know that I have had issues with my stomach for like, forever, and that I this summer started to actively try to get better for life by getting some treatment for it.

Well, that treatment has consisted of me giving up a lot of things that most people have some sort of addiction to. Things like sugar, caffeine, wheat, carbs and a whole heap of other things. Now, if you have ever been an addict of something and then stopped consuming that substance, that process of becoming “clean” is a very tricky one because there are so many withdrawal symptoms and your mind will play some nasty and horrible tricks on you.

I’ve been so down these past 4 weeks that I basically didn’t train at all. Why? Because I felt incredibly tired and sluggish from the limited food I’ve been consuming (not in quantity but the range) and every time I attempted to run I not only struggled, but I actually felt worse than what I did when I first started running. It was a complete confidence killer and I felt angry and upset, like all that time and effort I had invested in running had been pointless and completely wiped out of my system. I just couldn’t find the motivation no matter how hard I tried, it all just felt pretty pointless.

I had been told to give up on my sub 2 hour half marathon dream in Amsterdam because my body needed more time to adjust, repair and regain strength, but to be honest, I doubted I would ever be able to complete one in my life with that golden time. I actually doubted I was going to be able to complete today’s half marathon, especially when I was struggling with running 3 miles! With no proper training for a month, the stress of not being fit enough, a stone heavier than my race weight in Berlin this year, it even started to creep into my dreams and give me nightmares.

Here I was, broke as a joke and feeling depressed and isolated from all my friends due to my financial, dietary and health circumstances. I wanted to give up and give running and everything that goes with it the middle finger.

But then some of Bangs tough love crept up in my mind and bashed it around a little bit. What the hell was I doing? Why could I not see that this was simply a test of my patience and faith in myself, a temporary thing that would go away and at the end of it I would come out much stronger, happier and fitter person. I had to stop feeling so damn sorry for myself and realise that I really did go from sofa to finish line, but I didn’t stop there.

A week before the one year anniversary of the email from Bangs I will (hopefully) have run my fourth half marathon this year and of my life.

If my first one in Berlin was for me, my teenage fat me and to prove all the doubters wrong, and the second one in Copenhagen was to show my mum I could do it, then the third today in London was the one where I tried to chase away some of my most horrible inner demons with the help of the spirit of my fairy running godmother Bangs, and the fourth in Amsterdam will (hopefully) be a celebration of how far I have come and the great accomplishments I have achieved.

With every race I run, I seem to get to know a little bit more about myself.

In today’s race I learnt that it is ok to feel down and to be weak from time to time, as long as you don’t lose faith in yourself, and stand up and accept the challenge to be the best that you can be when that moment is presented to you. It really is an incredible feeling, and even better when it comes with a medal! 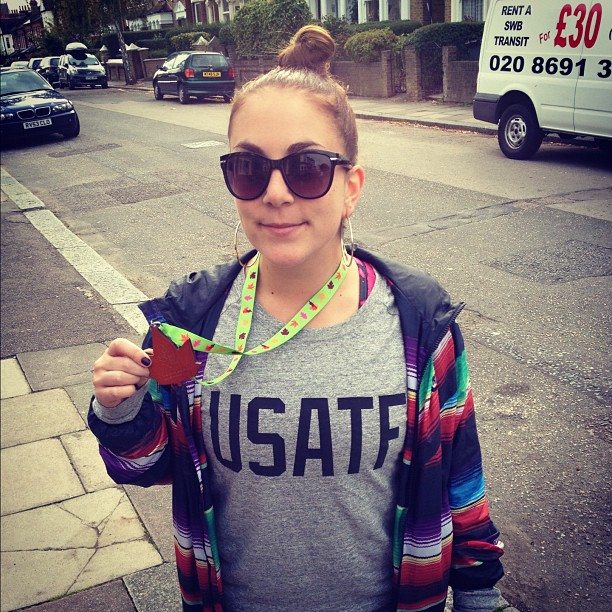