I cant stop listening to this song… 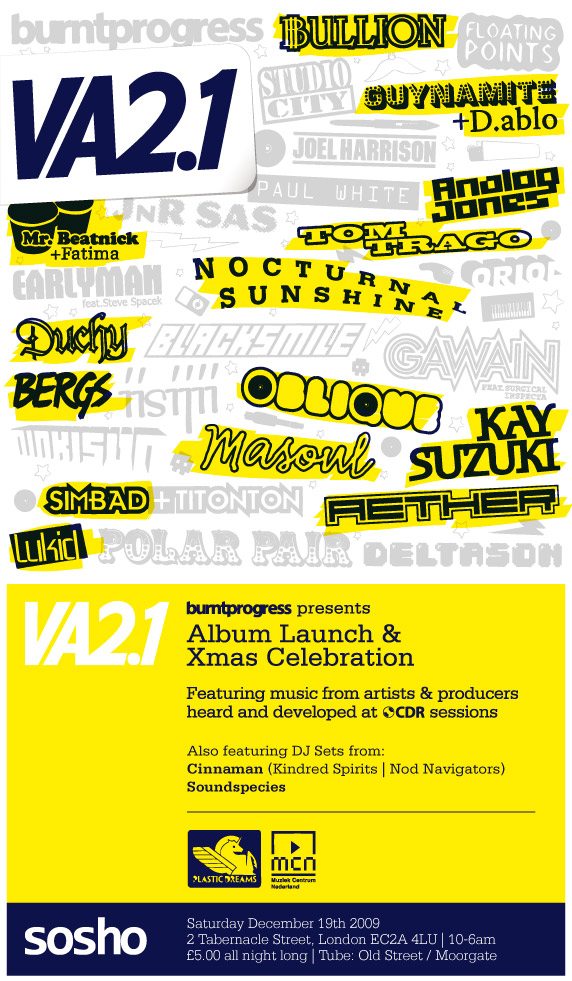 Tonights party is going to be off the hook! I have been excited about this release for months and feel so blessed to have been asked by the burnt progress crew to be part of such a great thing. I hope you guys will be able to make it down to Sosho, 2 Tabernacle Street, London this evening. Not only is the entry cheap and cheerful, but I mean, the line up is fucking amazing! I dont wanna be name dropping but Mr Beatnick + Fatima,  Bullion, Duchy & Phil Craig, Guynamite, D.ablo, Soundspecies, Simbad, Kay Suzuki, Lukid, Nocturnal Sunshine, Masoul etc etc (thats just a few!) Do I need to say anything else than:

YOU BETTER GET YOUR CUTE LITTLE ASSES DOWN THERE!

I hope you are well and that you have managed to escape the nasty flues that seem to be getting around no matter where you live. Thank you so much for joining the Little Miss Sunshiine party, it has been a great experience and I am very happy to be celebrating 10 shows over at Laid Back.

The thought behind this special edition show was not only to celebrate 10 shows, but also a way for me to say thank you to all of you who have been supporting me and motivating me to continue to do them, and to strive to become better with every episode. I am so thankful and feel so lucky to have such amazing listeners like you guys! And just like you all keep me motivated and inspired, the guests on my show do the same thing.

I want to thank each and every person who took the time out of their busy schedules to be part of this show.

Please find a more detailed introduction to every guest below, and don’t sleep on any of them, they are all truly remarkable people!

Agent J: Manchester based Agent J is the mastermind behind the great website and radio Groovement, a show that is broadcasted on Sundays on Unity Radio, as well as the organised of some wicked parties up in Manchester. Our paths crossed earlier this year, and this guy never seems to stop to amaze me with the quality guests (Daedelus and Gaslampkiller, Paul White, Alex Nut and Illum Sphere , Ras G, Speech Debelle etc),  and music that he presents. He has a big heart, wonderful smile, and great taste and passion for music. I was delighted to hear that he decided to join the celebrations by selection an assume track from Kutiman.

Azer: This tall fella is a DJ and Graphic Designer from Gent. He runs his own show here on Laid Back called Plastix (check the schedule for times) and I really wanted to have him on my show because I met him when I was in Brussels for the first time, and I remember walking with Julius in the sunshine as he was telling me Azer’s story. I will not repeat it, but it was for some reason a very special moment for me, and after hearing him spin at the Release Party, as well as hearing his show here on LDBK, seeing him do his video podcasts and reading his activities on twitter, I wanted to introduce him to some of my listeners that might not tune in to his show regularly. So make sure you check out Plastix, and a big shout out to Azer for attending my birthday bash.

Black Classical: If you like good music, especially jazz (like me), then the Black Classical blog is definitely something I would recommend you to check out. Not only do they have some of the most amazing mixes Ive heard musically up there, but, the blog is run by this very sweet person called Greg. Greg was the one who lost his voice and couldn’t record an intro. However, he did pick a song by Horace Silver, from the great LP . And he also gave me the honour of posting a fabulous guest mix of his on my blog that you can download and listen to when you want.

Blast Kid: Blast Kid runs one of my favourite shows here on Laid Back, Pulsations (check the schedule for times). I am very happy to have him on the birthday show because his selections always make me smile. I wish there was more fuss made about his shows because that kid knows his music, and I always end up discovering some new artists or track when I listen to his selections. So I am hoping that you guys will start tuning in to his show too, and hopefully we will see more fuss being made about them in the new year!

Blue Daisy: One of the people I think you should keep a close eye on for 2010 is Blue Daisy, an incredibly talented producer and beat maker from London. I got to know him through common friends on Twitter, and I had the pleasure of seeing one of his sets this past weekend. Safe to say that he completely blew me away, and I feel so honoured to have the exclusive track, Jagos Castle, included in the show. It is people and artists like him that reminds me on a daily basis why I fell in love with music in the first place, and you can tell that his passion and dedication shines through his work.

Dooks: Dooks, or Papa, is another talented producer and beat maker from the LDN. I got to know him this past summer, yet again through Twitter, and had the pleasure to finally meet him two weeks ago. I was very happily surprised by his pick, the Robert Mitchell 3io, since I don’t know many people who like them.

Emilie: Words cannot describe how much I appreciate the love and support you guys show me and just like most of you, Emilie is a listener who has been showing me just that since day one. I bumped into her when I was visiting Brussels for the first time, and her kindness completely blew me away. It is a privilege to have her on the show, not only because she is such a sweet person (with a great taste in music I might add) but also because she makes me smile and her positive comments keep me motivated.

JtotheC: This is my brotha from another mother haha… I know he is known under quite a few names, but for me he is known as JC, an overly talented and unique individual who brightens up the darkest of days with his remarkable persona and positive attitude. I can’t think of JC and not smile. I don’t think I have ever met a person with more energy than this guy. Oh, and if you haven’t checked out his EP, “A Man & His Funk”, I think it is about time you do so!

Julius: What can I say? Without him, there would be no Little Miss Sunshiine. I can’t thank Julius enough for giving me the opportunity to become a part of Laid Back, and for having enough faith in me to let me do my own show. The support and encouragement he has shown me since day one is something that I will always be grateful for. I can’t imagine my life without him, or Laid Back for that matter. So thank you so much for everything Julius, it is safe to say you have changed my life for the better.

Kato: I got to know Kato by pure accident after having attended an event that he allegedly was at as well, and I wasn’t sure if we had met or not, so I decided to contact him. During the process I found out that he was running this great website called Work Ethic. He is a hard worker with a lot of passion for good music and talent, qualities that I personally can relate to a lot, and that was one of the main reasons I asked him to join the party.

Lyrical: Stockholm based emcee, producer, record label manager, lecturer, and many other things, Lyrical is one busy man reppin’ Nothing But Skills, The Rah Rah and of course, the country that I grew up in, Sweden. This guy is another true talent that makes me proud of having a Swedish passport. He is a true inspiration, and I expect many great things from him and his crew in the years to come!

MeLo-X: I had the pleasure of meeting Melo for the first time this summer when he was performing at a Brownswood Bubblers party at Cargo. This Brooklyn based emcee, DJ and producer blew me away with his great live performance. We ended up crashing the Brainfeeder party after his show, and I will never forget running up and down central London trying to find some special headband he was looking for. Safe to say the rest is pretty much history, and the night I met him will always be one of the best nights of 2009 for me.

Nikkintu: If you have picked up the latest issue of the Anattitude Magazine, you might have spotted Nikkintu on the pictures made by the female photographer Texas. I was introduced to her music by her fellow friend and producer, Melo-X. Based in Brooklyn as well, Nikkintu is an artist who’s undeniable style of hiphop is infused with political fervor and a spiritual self -expression. It was a pleasure to have her involved in the show, and I hope you all check out and download her latest EP “History of Dreams”.

Powercut: I bumped into Powercut a couple of years ago when I was visiting some friends in Bristol. We ended up at a club called Timbuk2 and when we got downstairs, I remember being amazed by the great music that was playing. I went up to the DJ booth to see if the guy had a mix CD or anything I could have, and the DJ dropping all the funkiest music I had heard in years just happened to be Powercut. Always bringing the freshest and funkiest sounds where ever he goes, he is also part of the DJ collective, Funk From The Trunk, and they run top quality nights and events in Bristol by the same name.

Throwing Snow: With a BA in Astro Physics and a Masters in Music, Throwing Snow is indeed a very ambitious, passionate and incredibly talented guy. Apart from being an artist, DJ and a producer, he runs the label A Future Without, as well as doing a million other things (sorry, he is involved with so much that I can’t keep track of all his projects!). It was an absolute delight to have him part of the show, especially since he picked a tune from one of my favourite artists from this year, Floating Points.

8Bitch: If I may quote her on this one, 8Bitch is more than a woman. This crazy little Eastern European born chick makes my heart skip a beat and I adore her. She is a DJ, producer, vocalist, writer and … (wait for it!) DJ Hero character! Her talent shines through and I feel very privileged to have such a source of inspiration like her in my life. And let’s be honest, her intro on my show was a classic!

Some friends & fam who’s music was included in the show and who I think you need to check out as well:
– Ahu
– Bullion
– Illum Sphere
– Kidkanevil
– Mr Beatnick
– Rustie

And that was all for now my friends. I hope you enjoyed the show and don’t forget to tune in to LMS #11!